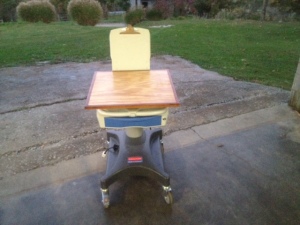 I went on a bit of a spree at the hospital in which I work.  I collected items inspectors deemed “no longer usable” and brought them to my shop.   It began as pure innocence with a laptop cart…as innocent as a 120lb cart can be.  Being concerned with gas mileage and living some distance from work, I’d rarely drive my truck.   This gave a high entertainment value to the patients that could sit up in their bed…watching me try to rein a unwieldy cart into the back seat of a midsized sedan.  It took a few months, but the inspector finally made enough trips to our hospital, discontinuing all carts. I became blessed with six weighted tool stands on heavy duty casters. 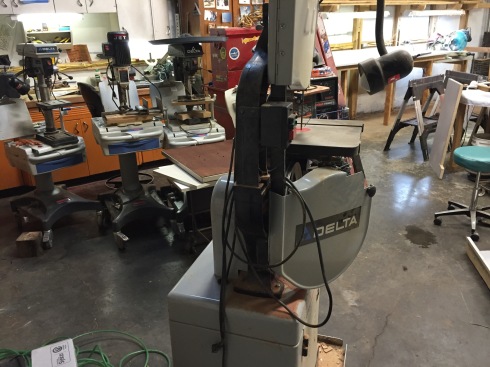 Stools were next.  A stool is of utmost importance in the shop.  Without, a great deal of creative ability is lost since one cannot sit back and take a look at how the entire piece of furniture is coming together.  More importantly, opinions are lost due to the fact that the friends that voice them won’t stop by the shop and stay a spell due to the lack of places they can sit and drink a beer while they watch you work.

By this time, the hospital maintenance crew began calling the loading dock on which they would stage items to be taken to the dump “Jarrett’s Porch”  since I would load up most items, making their load barely worth hauling off.   A stool was placed on my porch.  It was tall, black, had a good back, working hydraulics, and a solid metal ring for a foot rest.  It was such a fine deal that I felt as if I was stealing it, so I took the wrench that I always carry in the pocket of my chef’s pants and had the thing broken down and in the trunk of my car in under five minutes.

I still don’t know the appropriate name of the stool I collected next.  Some doctors call it a “stitching stool” while others call it a “dentists stool”.  I believe its just an exam stool…not to ever have its name reversed and used for a stool exam…I hope! 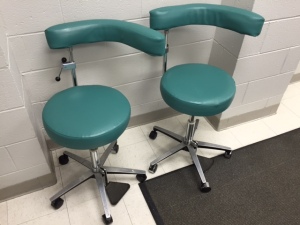 Whatever their name, I collected three.  Took me two trips, so I had to hide them in the linen hallway since people caught on to what I was doing and wanted to take part in collecting hospital trash for their own use.

Next on the list was sheets of glass that protect the desks in Administration.  Glass to protect.  The notion has always seemed odd to me.   I understand in a widow type form, but why would you add 100lbs to protect a robust desk that has a good solid finish?  Because its not a robust desk, its made from particles and glue and the finish is more of a surface than it is a true finish.  The notion of a glass top had to be purely for fashion and nothing else.  Coffee rings and fingerprints: fashionable indeed!

The glass not living up to its hype found its way to my loading dock.  The following day, it found its way home and I put it to immediate use in a gun cabinet I was building with a friend. 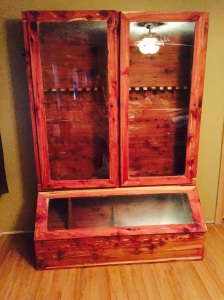 Next was an armoire from a patient room remodel.  The free standing structure who’s only purpose was to hold an occasional coat was built like a tank.  It now houses hundreds of pounds of power tools and nail guns…to prevent them from dust and wandering eyes.

The final load I have Women’s Center to thank.   I’ve been waiting for years to turn my mitre saw stand into a mitre saw station.  With the cabinetry and countertops I was able to do just that. 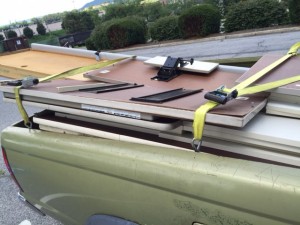 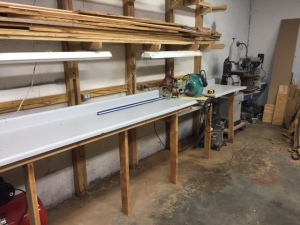 Once the countertops were in place, it became abruptly apparent that my obsession had become a problem.  I noticed I have all these nice features in my shop, but I couldn’t use them because there was no room due to the collection of junk that was waiting to be turned into something.   It became so bad that I couldn’t do the simplest task without shuffling everything from one side of the shop to the other.   I had antique chests, antique refrigerators, pie cabinets, tons of scrap stainless steel, angle iron, wire, lights, even kitchen sinks.  I was going to move it all to the barn beside my shop, but it too was full of many of the same items.

Finally, the line had been drawn as a lightning bolt through my brain.   Twelve loads to the scrap yard and dump later, I returned many items and gave them a few more.   I have recycled enough.  To all the hospital employees that I have infected with the Collecting Disease, I am deeply sorry.  I hope you find strength to build your immune system back because nothing will cure it, although I have found a good slap from the spouse does help slow it down at times.

Now its time to get back to woodworking.  So please, all I ask is that you don’t tempt me with calls of antique appliances or old wooden pieces of furniture.

5 thoughts on “One Man’s Treasure”