If one looks up coming of age rituals, they probably won’t find too much about viruses or sickness in correlation with such celebration.

I did celebrate, I certainly came of age, and I don’t know what ailed the crew, but it was tenacious.

Tahanea was the atoll.   Customs had boarded our vessel and cleared us (even though we had copious amounts of chocolate and liquor in the bilge).  We resupplied with fresh fruit, stationary, propane, and bushels of fresh baguettes.   The last remaining task was to drop off everyone’s correspondence at the post office.  The post office trip went without a hitch (besides the one that kept our dinghy secured to the dock).  Unfortunately, the post office was located right next to a grocery store.    The grocery store was stocked periodically throughout the month, but not always stocked with what was low…it always received the same bottles of water on the second Monday, the same poundage of flour on Tuesday, etc.    The store had empty shelves at those locations, except for the day of delivery.   Imagine walking into a store with empty shelving everywhere and that being the norm.

Not all the racks were empty.    there was a floor rack, one of those revolving models with clips, for potato chips.  Instead of chips, there were chickens.   breast and wing.  The chickens were clipped in by the wing.   At one point in their afterlife, they were fried.    I don’t know if that was before they got on the boat at Moorea, or after, but it was a long, long time ago.   Flies were prevalent as the door to the store was almost always open, and when it wasn’t, they could easily burrow under the wall to the crushed coral floor.   Want to know what else was prevalent?  My shipmate Alex’s desire to eat not one, but two pieces of said chicken.

We made haste back to the ship, so we could reach the pass at slack tide and sail through with minimal discomfort.  Evening was setting in.   Tahanea was becoming a distant spec on the bobbing horizon.   Alex became sick.  At first we thought it was due to our course.  We headed more upwind for a more amiable experience.  This solved nothing hours later.   He was sick below deck, he was sick above deck.  His sickness carried through the next day.   Hallucinations set in.   Fortunately we reached our next atoll and entered its pass without much of a fuss.  Any other time, the pass would have been delightful as the tide was incoming, making it a waterpark for a 93′ ketch to play.   But in this case, Alex couldn’t hold his bucket, so the decks were awash, even when they weren’t awash, if you catch my drift.

That night, we set anchor, sliced fresh tuna onto baguettes and added a slice of tomato.   Then it hit.  One more crew member down.   She got violently ill in the forward head.   She got ill in the sink that must have had the world’s smallest drain because I was thinking to myself while cleaning it up why couldn’t at least a few of the tuna chunks been able to make it down and out to sea!?

I slept topside that night, thinking my chances were better with fresh air and freshly washed decks.   The next day, another crew.  Then the captain.  Everyone hallucinating while fighting violent bouts of vomit. Everyone but me.    I filled all containers up I could with water and put them within reach of everyone with saltines and plenty of towels.  I then packed my bag, rigged the small trimaran, and sailed to shore.  I had a radio, and thought about keying another radio on the boat on constantly, so I could hear if anything went severely wrong, but thought against it because I could hear the guttural heaves from shore.

Three days passed.  I checked in on them, cleaned up, left them with fresh water, then I’d sail back to shore of this uninhabited atoll.  I was going to make a third night of it, but the coconut crabs found my location.   I decided to sleep aboard the trimaran’s trapeze and anchor it some distance from both shore and ship.

Food was an issue that I’ll just touch briefly on.   The lady that was in charge of ship-stores had a slight lapse in judgement and took all meat from the ice boxes and freezer and stored it under her berth.   This must have taken place during our passage from Hawaii to French Polynesia….We didn’t know such until the rancid smell deemed it too late to save.   We never went hungry for food.  The fishing was our saving grace.   Tuna, grouper, crab.  The last thing you want to eat when everyone is sick is seafood, especially after you’ve been eating little else but seafood for the past three weeks.   Needless to say, the crew grew weak because they were too ill to eat and the thought of eating seafood made them empty anything they might have had in their system.

Day five found the Captain and a few of the crew members feeling well enough to set sail to a place that was closer to medical care, just in case.   Now before you set any type of judgement, I was going to lend a hand, but was told by the captain to stay clear, just in case.   After all, the ship had roller furling system, auto pilot, and a huge Caterpillar engine to propel it if the sails weren’t’ an option.   He din’t have to ask me twice.   I sailed upwind of the larger vessel until we reached an atoll on which the only residing family had a grandfather that once practiced medicine.   Fortunately, everyone got over the plague before he came aboard and the outbreak claimed more victims.   We met the family, they showed us their amazing fish farm, complete with fence and barracuda to ward off predators (donkeys of the water), and had a grand game of soccer.  They cooked us an amazing meal and we watched the Chris Farley Ninja movie in French.  It didn’t quite matter that at the time I hadn’t mastered the French Language because the diesel generator that could supply energy for a city was humming right outside the window behind me.

What upsets me the most?  Coconut Crabs.  They play for keeps.   They are predators.  They will one day take over.

What upsets me the second most?

Well while I was watching Chris Farley do Ninja Moves, the captain invited the aunt aboard our vessel, and after their meeting, I found my stash of rum and chocolate (that I was going to trade for pearls) had dissipated into thin air….well almost dissipated.  Both the Captain and the aunt had chocolate on their face and reeked of cheap rum.   Who knows where the rest of it went.   Probably under her berth.. that’s where I had mine stashed.

We leave the family the next morning in search of our next adventure.   While securing anchor at the other side of the atoll, you know what Alex tells me?   “That chicken I had from the store was too salty”.    I about pitched the damn dude overboard.

Moral of the story?

Hell if I know.  If I did, it might have had a better outcome.  But I believe I came of age.  Well, my wife may disagree with that statement…so instead I write “I have a better understanding of self”   You think you are squared away mentally and have no qualms with others?  Get thyself out on a boat and prepare for a lesson of a lifetime.

The time spent by myself for a few days wasn’t awash.  At the beginning I was so scared that I could only justify it by being fiercely pissed at the other crew members for getting sick.  It wasn’t their fault, it wasn’t Alex’s fault.   It was my fault for not being able to deal.   Shit happens and the store didn’t have any toilet paper.  Shelves were empty.   They weren’t going to get any for another two weeks.

Consumerism isn’t at the top of every country’s needs, just ours unfortunately.  This wasn’t the only time that I took myself out of the game for health and well-being.  This won’t be the only time you do.  Don’t dwell in the dark and then act like you have no sense.   Take this opportunity to slow down, show support, and strengthen yourself so you can be ready to hit the water with full sail when the storm passes. 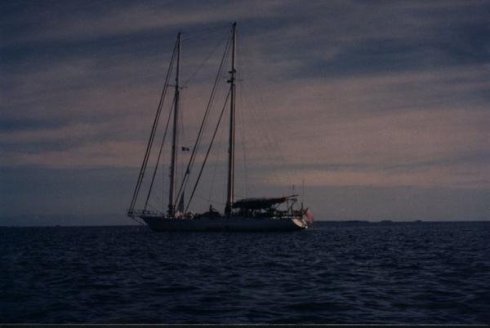 Ps, when taking some time off, bring some variety with you.   Don’t banish yourself to an island (or atoll) with only Grisham novels…or else in the heat of the day, you start to think of the beach as the courtroom and the coconut crabs as the jury out to crack your skull in two.     Fortunately, I wrote a great deal.  The following day, I would read the previous day’s writing.   I found the writing to be absolutely hilarious..running for dear life from assassin crabs?   Unfortunately it was an accurate record of what had happened.   I found they can run faster than me.  They can swim faster than me.  And hell yes, they can climb faster. than. me.

2 thoughts on “A personal tale about the salty chicken plague.”