Skip to content
A two hour trip north found my wife and I visiting her Aunt and Uncle in Harrisonburg.  My wife's Uncle wanted to take me to an Ace Hardware Store.  I thought he done fell off his rocker because there certainly can't be anything special about a chain Harry Homeowner Hardware Store.  I couldn't have been more wrong.  Not only was it far from normal, they were having a huge tool show in the parking lot(s).  This tool show was so massive that there were parking attendants to squeeze all of the vehicles together in the parking lots and surrounding grass lots of the property.  The tools weren't just construction grade.  Infact, they were mostly tools for the woodshop.  Phil and I were in Hog Heaven for sure.  And in deep trouble if the salesfolk were worth their stock.  We looked at spindle sanders, shapers, drill presses, saw blades, and sandpaper, but did our best to walk off when the salesfolk whipped out the price sheet. Fortunately we made it out of the circus sized tool tent with no damage done and into the hardware store.   This store had everything!  It made Woodcraft look like chopped liver.  The damage was done when we reached the sandpaper that one of the tent attendants educated us on.  I was only going to get a pack of one grit to help me get through some stubborn reclaimed lumber, but somehow I ended up with three different packs of varying grit and a cyclone lid to make a bucket into a dust collector. We put our purchases underneath the tonneau cover of the truck so our wives wouldn't see when we got back to the house. No such luck.  They were onto us as soon as we pulled into the driveway.   My wife's only concern while rifling through my bag she confiscated was the one item that the store gave me for free..the strip of white paper.  She looked at the total on the bottom of the piece of paper as I winced and she said "$67.00?  Is that all?  Why are you worried?"   I immediately began kicking myself and wanted to go back if I was supposedly allowed to do more damage than I did.  I then began thinking just how much did she spend at the fabric store she just returned from?  It must have dwarfed my receipt.  I'm occasionally a smart man.  I left my thought a thought and didn't bring it into existence through a conversation that can only go downhill. Uncle Phil then took me down to his shop and I was quickly drawn to his nice setup.  Natural paneling on the walls, a shop centered around the tablesaw.  A bandsaw who's fence made me envious of all the resawing it could do, a workbench Phil built, all the proper tools for a shop, router tables, tablesaw sleds, and two recliners to be just worn out enough to be dedicated to shop studies and late night reads.     Phil supports his addiction to the shop by being the Executive Director at the nearby hospital.  I keep his number close at hand since he's been in the healthcare profession for quite some time and I'm still fairly new and quite ignorant to the game.  I feel like I'm always asking him if a hospital's process is correct for doing this, or can a director really do that, or how does the corporation form so many policies.  I'd be sick of my conversation if I was him.  Luckily, we were in the shop, and shop rules are the same no matter where you are: No talk about work...unless it can somehow be transformed into a dirty joke or sexist saying.  We turned in for the night with talk about going to brunch the following morning. When morning came, we loaded up and headed to Luray.  I had never been there for a destination, just driven by.  I thought we were going to a simple restaurant with great food. I couldn't have been any closer to wrong.  I quickly wanted to blend in with the landscape since I left my sportcoat at the house.   Champagne Brunch at the Mimsyln Inn.  The Architecture was original and only got better upon entrance. 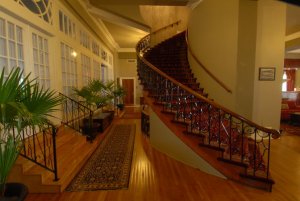 12' oak doors  that opened into the lobby, a beautiful curved staircase with a detailed iron hand rail, paintings old and young by local artisans, The dining room had copper chaffing dishes, wooden tables, and clawfoot chairs.   The funny part about it all is that we spent the better part of our woodworking conversation (we try to entertain the wives by not speaking the language of the woodshop all of the time) talking about the plastic interior plantation shutters. Phil and I have many similarities with our projects and desire to complete projects that we'll probably never have time to complete.   We did everything but take the shutter out of the window while seated at our table.   We discussed the varying hinge mechanisms and rods and hooks that can be implemented to make the shutter work in various windows.  The build would be much like model making...small parts that have to be placed with precision or else you might as well have a bunch of kindling connected to a rod that functions just as good as it sounds.   I'll let Phil take the lead and make sets for his house (aka locate hardware that doesn't make it such a pain) before I join in on the shutter making. 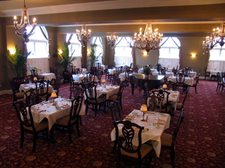 My wife and I departed their company and the beautiful Inn since I had to return to reality at the hospital on the following day.   That evening once we got home, I continued to set up my shop for a production run of children's furniture and began to make use of the dust collection cyclone lid I bought at the hardware store. The system is almost caveman like with simplicity, just introduce a bit of an angle and you'll get a torrent of wind mimicking a cyclone, which drops most sawdust and debri in the 5 gallon bucket and only lets the fine dust continue on to the Shop Vac.   I want this system to use for both my router table and my orbital sanders.  For the time being, it will also serve my compound chop saw.  With that said, I wanted it to be extremely portable yet pack everything with it, and still be able to use the Shop Vac independent of the "dust bucket".   I'm far from done, but you get the idea from the pictures below.  A little scrap plywood, some oversized casters to run over whatever may be in its path (two straight wheels in back, one swivel wheel in front), and a shape to take up as less of a footprint as possible.   I'm mounting the bucket with something that most folk forget about working with in shops...magnets.   This way I don't have to cut out a precise ring for it to fit into and it will always lock into place after I dump it....and it will be a breeze to take off and dump since there are no straps or wing-nuts to undo.  I'm also robbing an extension cord wind-up out of an old hospital cart and I'm going to wire it to a gang box loaded with 4 outlets that turn the vacuum on whenever power gets supplied to the tool in the outlet.  It may stay at 90% complete until spring.  Time and aggravation of not having all of the features will tell. If you don't have any dust collection in your shop, this is certainly the way to start out, and if you have a large dust collector, remember it won't do as good as a job with collecting the fine particulate that sanding creates.  Speaking of large dust collectors, be sure you opt for the same cyclone system, but use a trash can as shown in the bottom picture.  The setup will save your collector from years of abuse and save your back making it easy to dispense shavings and such. 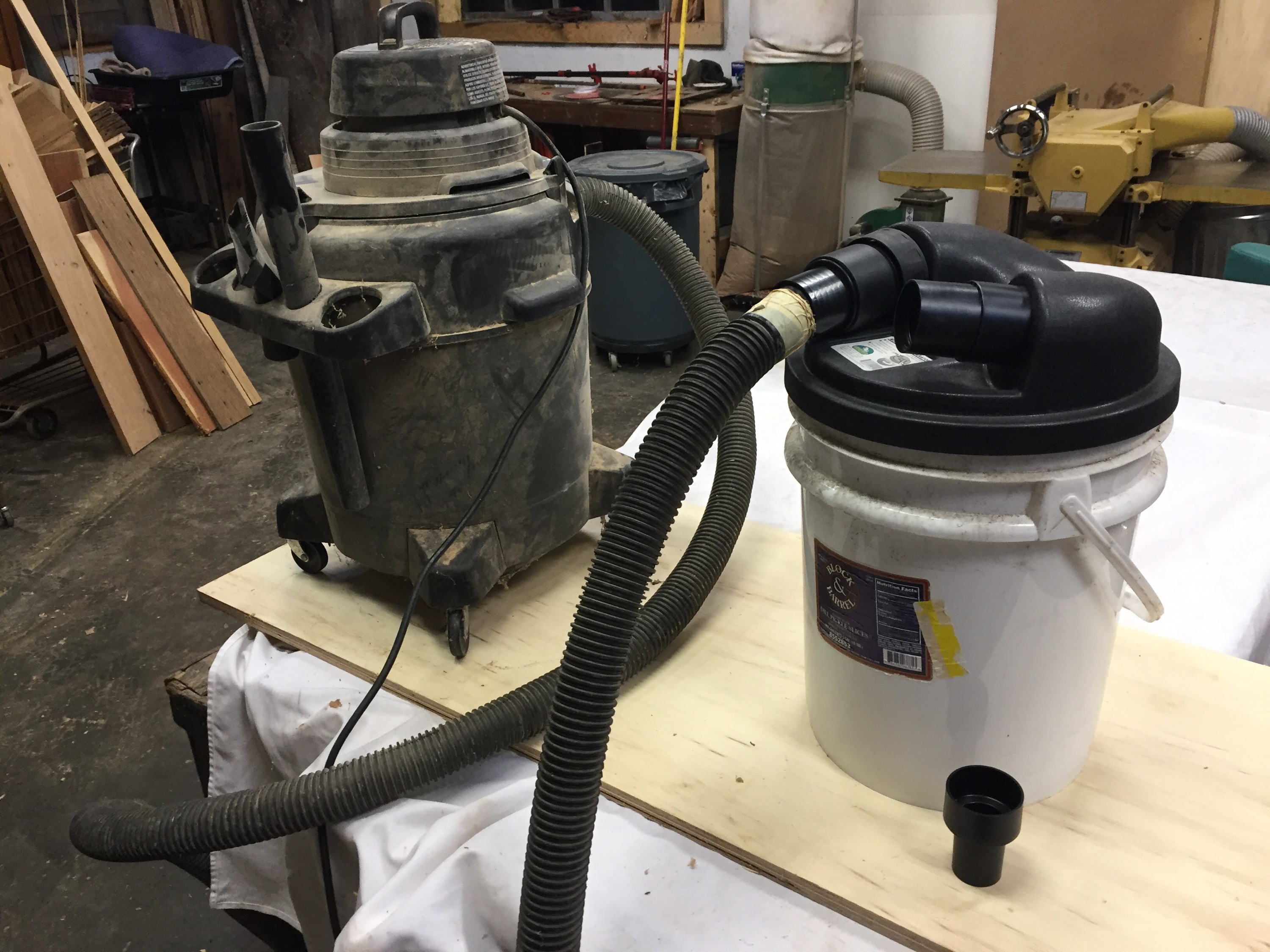 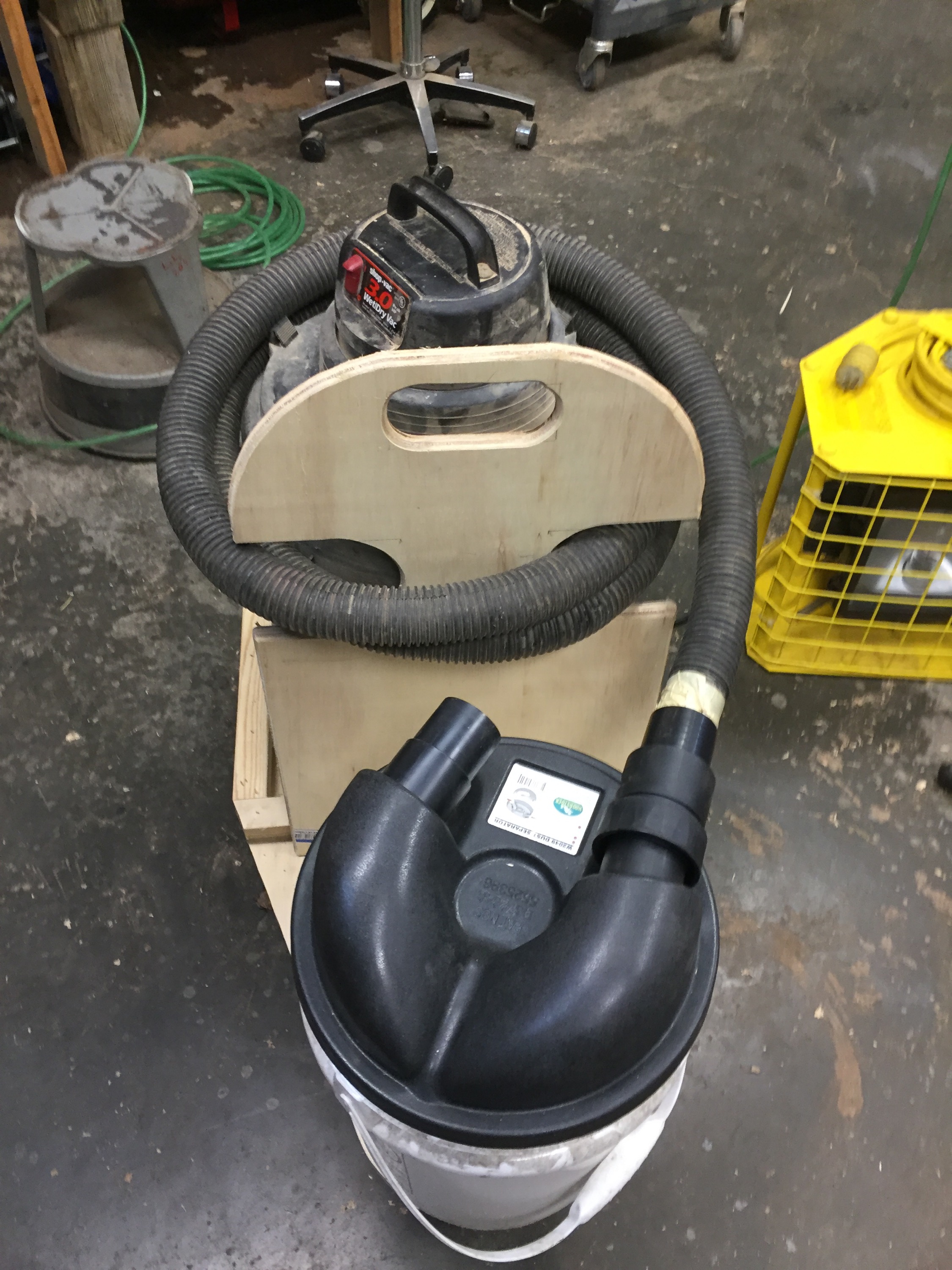